skip to main | skip to sidebar

Bonnie Brae will be celebrating its centennial in 2016 with a large party at BB. Here is a Centennial website, and the invite can be seen in the 2010 decade: BB Centennial. Address comments or questions to George.Edw@Gmail.com
Posted by George Edw. Seymour at 12:06 PM No comments:

Posted by Donald The Greate at 10:04 PM No comments:

Posted by Donald The Greate at 10:00 PM No comments:

I so do miss the farm! I had 150 brothers of all colors and religions. We all stuck together and helped each other without even knowing it. The brotherhood was strong even though we may have fought among ourselves we always stuck together. If you messed with one you messed with all of us. I am an only child so that bond stayed with me all of my life. I ended up in Florida. Last time I visited the farm i was heart broken. A lot of the farm is gone or crumbling from neglect. I was in every cottage except Kiwanis. I started in Osborne.
If any who read this remember me, Danny Collins 1961-1967, my email is: scorpion1118@gmail.com Send me a line and i will try to answer all. I am still in touch with:
John Hendershot (coach)
John Cambell (asst coach)
Joey & Carman Gugliardo
Bob West
That's off the top of my head. Hope to hear from more.
Dan Collins
Posted by Daniel Collins at 1:38 PM 1 comment: 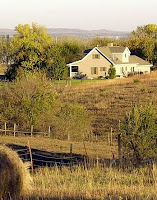 Some of the older alumni may be missing the farm life. Have you ever wondered where the best farm places are in the U.S.? Well, "Progressive Farmer shares its 2009 list of the absolute best rural places to raise a family." They suggest that you, "click through our gallery as we count down the top 10 counties. Then stick around, as we list its top picks for the best rural counties in six categories."

Click on the image to see their number 8 choice in McPherson County, Kansas. Or click here to see all 10 of their picks for the best rural places to live in America. The Progressive Farmer magazine can be found here.
Posted by George Edw. Seymour at 11:29 PM No comments:

For the first time in its 91 years, Bonnie Brae entered National history by marching in the 2009 Presidential Inaugural parade as seen on several National television stations, including CNN and C-Span. But before they left NJ, the Knights got haircuts as described by Linda Sadlouskos here.

Later, Linda, a staff writer for the "My Central Jersey" newspaper describes the bus scene as it arrived in DC, and you can read about it here. "They were totally in awe," the school's special events coordinator Cathy Phillips said at about 9 a.m., shortly after the bus's arrival. "They were looking out the windows at

the landmark's -- I don't think any of them had ever been here before," Phillips said of the Knights band, traveling with their advisers and chaperons for a very long one day trip."

During the parade the Knights played on Pearl drums as seen in this photo from the Pearl website.

National Public Radio covered and summarized the day here, and provided two sets of pictures. This first one, here covers the swearing in ceremony, whereas the second set of 32 pictures covers the parade here
Posted by George Edw. Seymour at 7:28 PM No comments: